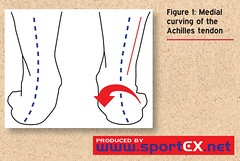 Like many runners I have had Achilles tendon problems. In my case I had very painful Achilles problems that were worse in the morning to the extent that I had to go down the stairs in my house one step at a time ie with both feet on each step. That was however brought on normally by playing 5-a-side the night before. Really that was one of the things that spurred me headlong into my midlife crisis to get fit.

I don’t really have Achilles problems now. Here’s what I did:

1. Ice. You can put ice in a bag and towel and keep it on your Achilles tendon for quite a while. It does not FEEL as cold as you would think as there are less blood vessels there.

2. Ice is a bit of a faff though. So use some generic ibruprofen gel. I think if you have a lot of ibruprofen it is not good for you so using a gel is more of a focussed way of applying less whilst getting the benefit. You don’t have to get Nurofen brand…they are all the same. Use it before you run and after you shower; I occasionally use tablets as a general knee/achilles preventative swelling measure SPARINGLY though. Make sure you gel the entire length of the Achilles including the bit where it joins whatever it joins to at the top because that bit can hurt as well.

These two work because they reduce the inflammation and swelling. Enabling your body to recover quicker.

3. Rest. However I find that once you get the Achilles problem it is hard to get rid of it. So you need to rest.. It is unlikely you will train through it without changing your training regime. So maybe never go running on consecutive days, cross train instead.

4. Physios will give you lots of stretching. Maybe tha works it didn’t really for me. Although having said that I made a conscious effort to increase the strength of my lower leg which probably helped support the tendon.

Anyway, I did all of the above and it didn’t really solve the problem. But for me here’s what did.

5. Podiatrist. Basically if you pronate ie looking from behind you standing up straight then you would find that you two inside ankles ‘go down’ (see above diagram). Which is all well and good. BUT what it means to you as far as running is concerned is that your tendon is being stretched and pushed from side to side and it doesn’t like that. You would think there was now some operation or special procedure that would sort you out for a couple of thousand pounds? Well no. See you r doctor if you pronate and get him to refer you to a NHS podiatrist and a little while later they will insert a wedge under your heels. And for me that was what made the difference.

6. I think also that you need properly supportive shoes. I have recently inflamed my Achilles again due to wearing running flats which have no support and virtually no cushioning. My own fault, Ishould have known. Back to the wedges!