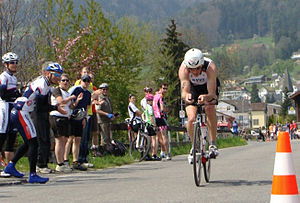 After having moaned a bit on this blog last year about the London Duathlon I feel obliged to give them a bit of free PR this year.

I bemoaned the fact that their distances are ‘wrong’. Wrong in the sense of non-standard rather than incorrectly measured. Apparently the new organisers did change the transition and runs so that they were more accurately matched to the advertised distances.

Well this year they have introduced what they call a ‘classic’ distance. Others will call it a standard distance but never mind! Semantics. 10k run: 40k cycle: 5k run. The bike lap is (per lap) 7 miles or 11.25km so the cycle will be either 45k or 34k

If it’s 3 laps on the bike then getting under an hour for the bike leg is the thing to aim for. Or 2 hours for the whole thing.

So hopefully the better duathlon competitors will be entering the classic distance. And for many others that means being able to more properly compare your performance to some Age Group GB athletes.

4 thoughts on “2012 The London Duathlon in Richmond Park – New distance!”