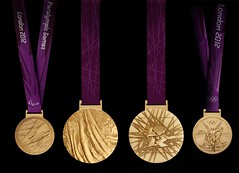 Yep, one of these.

Stuart Hayes wins Team GB’s first Tear-Tri gold of the 2012 Olympics. Well at least he did as far as I’m concerned.

Just like the cycling road race all team members really deserve a medal if their main man/lady wins. Stuart Hayes is of course no exception.

As a cycling domestique in the Hyde Park race he helped control the pace of the bike leg saving the legs of the Brownlees for the final leg. Without his performance the gold would have been MUCH less likely.

Of course on the run leg team members can really only offer a psychological benefit. On the bike there is a significant performance benefit from drafting and perhaps also by being able to slow the pace of opponents.

Well done Stuart. Probably the greatest unsung hero of Team GB. If I was Mr Brownlee I would at least get a replica made for you!

I was also very interested to hear you speak about the last couple of months training when you implied you did very little run training – presumably to peak for the bike. Not a bad individual performance considering that either! I think many of us in the multisports world would have liked much more in-depth analysis including that which was given by Holland and Wellington.