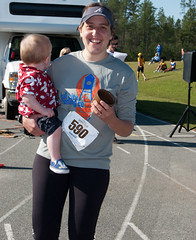 I often really wonder if I should have been the 10k runner. It seems to me a lot more useful distance to train for. Especially if you are doing triathlons and duathlons.

Even a sprint distance duathlon has you running 5+2.5=7.5k – which must be physically similar to 10k if you add in the effect of the 20k bike.

Similarly the 5k at the end of a sprint tri is obviously harder than a basic 5k parkrun – the latter of which has neither a bike session nor a swim before it !

Then again 5k and 10k are physiologically similar.