The three peaks challenge is one thing for walkers but I think the skyrunning series might take off for the runners amongst us attracted to something a little more challenging and aspirational.

Growing increase in sports participation gives us new milestones to achieve. A marathon was one thing…now it’s an Ironman triathlon.

Rather than Couch to 5k; maybe couch to Glencoe is a REAL challenge 😉 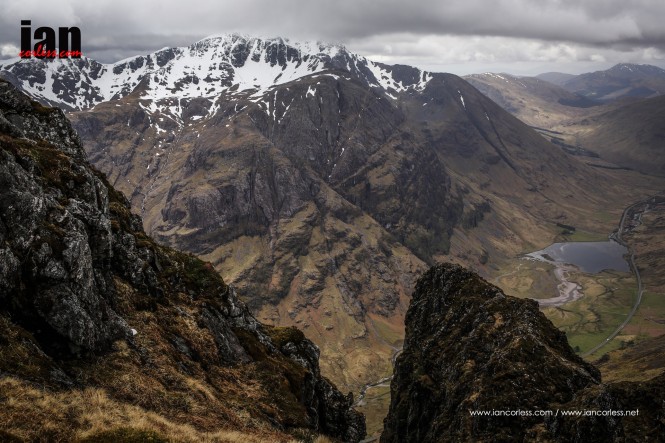 Classic Glen Coe view looking across to the snow-capped Bidean massif from the Aonach Eagach ©iancorless.com

The Salomon Glen Coe Skyline is just one week away. One of six races in the 2015 Skyrunning™ UK calendar, the ‘SGCS’ is arguably one of the most anticipated races in the UK in recent years. It was thought by many that the UK could not produce a race that would hark back to the roots of Skyrunning as seen at Trofeo Kima, the Dolomites SkyRace or Ice Trail Tarentaise. They were wrong! The UK may lack the altitude of the Alps or the Dolomites but we have mountains, routes and scrambles that will test the most experienced competitor. 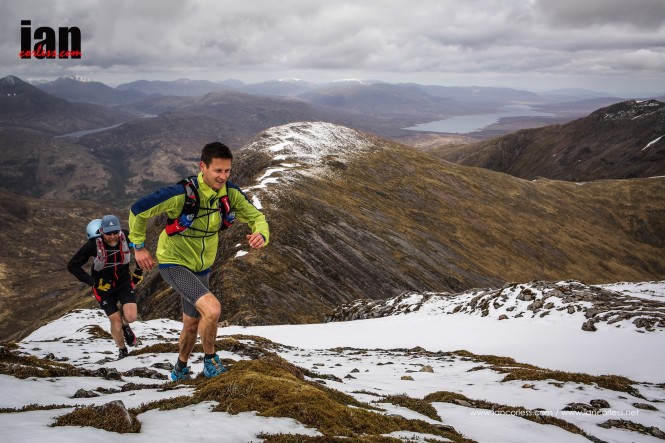 Race director, Shane Ohly, and course planner, Gary Tompsett, running up towards the summit of Am Bodach (CP12) ©iancorless.com

Shane Ohly from Ourea Events and course planner Gary Tompsett have come up with a beast of a course, a course that epitomizes the ethos of Skyrunning and in doing so, the race has turned the heads of not only the running world but also the media.

‘We are not creating another mass participation fell or trail running event, but rather a world class Skyrunning course for experienced and competent participants,’ said Shane Ohly in a recent interview with the the BBC. ‘The Glen Coe Skyline is a fusion of mountain running and alpinism where competitors need to be skilled at both disciplines to negotiate the course.’

Never a true word has been spoken and to that end, the SGCS arguably has one of the most experienced fields assembled in any race that has taken place in the UK. A race that has required participants to ‘prove’ competence to take part has made interesting reading for the race directors and Skyrunning UK.

Looking through the 170+ runners who will toe the line on Saturday August 22nd has confirmed the depth and talent of each and every Skyrunner. A familiar thread is noted, buzz words such as Bob Graham Round, Cullin Ridge, experienced climber, Skyrunning, Dolomites and Trofeo Kima appear regularly in the entry list. It makes highlighting some of the key runners for the race difficult. 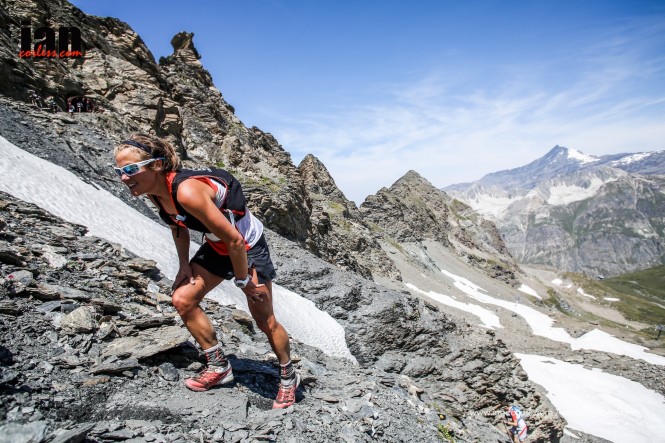 However, one name clearly stands out, Emelie Forsberg. Emelie is the current Skyrunning World and European Champion for the Ultra distance. In less than 3-years, Emelie has risen through the Skyrunning ranks to be the female face of the sport and her presence at the Salomon Glen Coe Skyline is more than a confirmation that this race is well and truly the ‘Dogs Bolx’ as one keen entrant stated!

‘I love the mountains and I love technical courses. This Salomon Glen Coe Skyline route looks amazing and a challenge. Ridge running and scrambling; I can’t wait!’ said Emelie after finishing 4th at the Dolomites SkyRace.

‘The mountains provide a wonderful natural playground and non more so than those in and around Glen Coe, the 2015 edition of the Salomon Glen Coe Skyline is going to be a spectacle like no other race that has taken place within the UK. We are fully aware that this race is not for everyone,’ said Ian Corless, Director for Skyrunning UK. ‘However, just like the top European races we want to invite people to come and join us for the weekend. We want a party, a celebration of running and in the process Ourea Events has in place opportunities to go into the mountains with guides and experience the race as spectators but in a safe way. This is going to be very special!’

Jasmin Paris, fresh from victory at the Dragons Back Race will without doubt provide Emelie with a race. Jasmin’s experience of British fells and mountains may well provide a distinct advantage of the Skyrunning world champion? 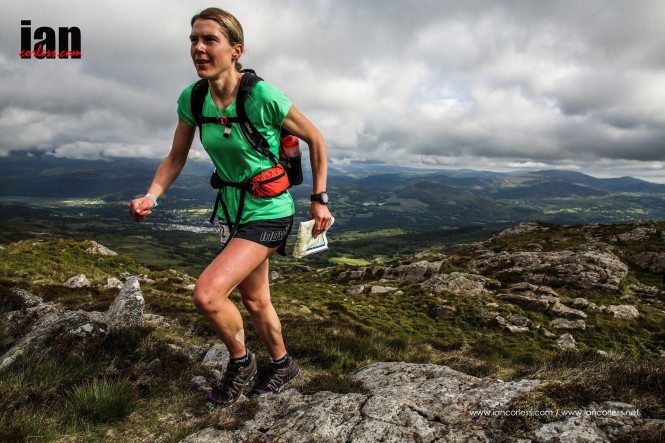 Jasmin Paris, 2nd overall at the Berghaus Dragon’s Back Race (and sure to give Emelie a run for her money) ©iancorless.com

Sharon Bird is an Irish International athlete, Gabriel Lees is a British Ski Mountaineering Champion and Victoria Moseley has excelled at Scaffell Pike and the 3 Peaks Race. But the female talent does not stop here, recent V3K winner and experienced Sky and mountain runner, Sarah Ridgway will be in the mix and we also need to keep a close eye on Liz Barker, Gillian Caldwell and Sarah Ryan. The ladies race is brimming with talent and the podium is wide open. 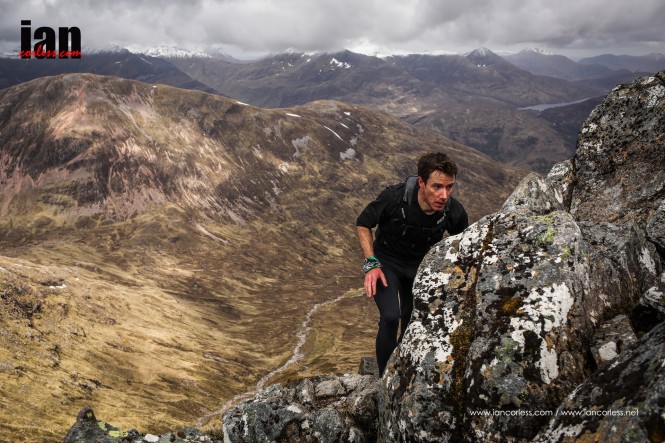 Esmond Tressider may well be the odds on favourite for the men’s race as he is a previous record holder for the Cullin Ridge and has had very recent experience of racing in Europe on the Skyrunner® World Series. The last minute withdrawal of Finlay Wild increases Es’s chances but Joe Symonds will without doubt have other thoughts. Joe like Es, understands the UK mountains and fells and has extensive experience of racing in Europe. 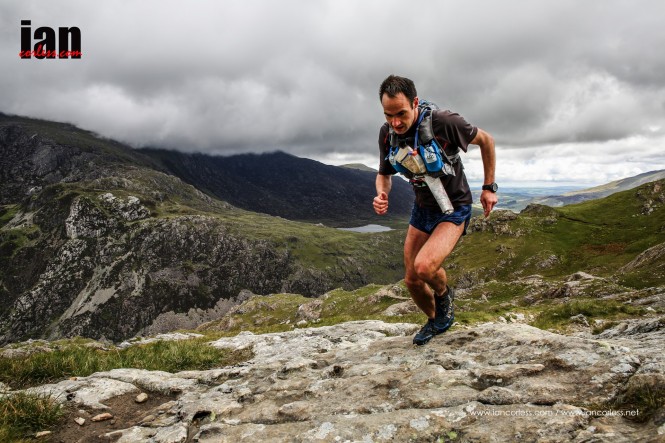 Jim Mann, Berghaus Dragon’s Back 2015 winner (but a little scared of heights!) ©iancorless.com

Jim Mann won the 2015 Berghaus Dragons Back Race with a world-class dominating performance makes him a podium favourite and potential race winner. 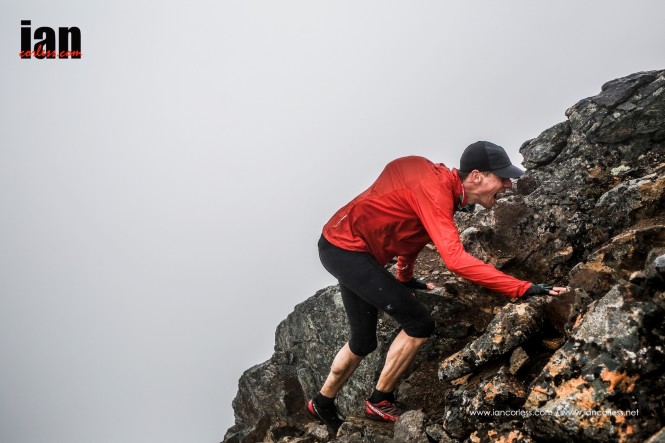 Florian Reichert has been racing on the Skyrunner® World Series for several years and has had great success at VK and SKY races. He recently ran the Tromso SkyRace so the ridges and scrambling at Glen Coe will play into his hands. He is however a runner a runner that loves to go fast. Expect Florian to make places in the latter stages of the race.

Konrad Rawlik recently raced at the Dragons Back race and still produced a great performance despite injury. If fully recovered, we can expect Konrad to dictate the early pace and a podium place is a distinct possibility.

Scott Forbes, Anthony Alasdair, Andrew Barrington and Edward Hamer all may prove to be dark horses on a course that will test each and every participant to the limits. The race may only be ‘just’ over a marathon in distance but the accumulated ascent of over 4000m, technical ridges and scrambling make the Salomon Glen Coe Skyline THE race of 2015 and one that looks set to create a stir for years to come.

A celebration of running, a celebration of climbing; the Salomon Glen Coe Skyline will bring to distinct sports together in a pure celebration of Skyrunning that offers a tribute and homage to the pioneering days of Marino Giacometti, Bruno Brunod and Fabio Meraldi. To that end, on Friday night before the race, 2 films will be shown: ‘THE SKY’S THE LIMIT’ that provides an insight in to Skyrunning and the yet to be released (Oct 20th), Salomon SRTV episode, ‘FAST and LIGHT.’

The future of Skyrunning in the UK is very exciting and Shane Ohly sums it up when he says: