Either Samsung treated me to an all-expenses paid trip to Korea or this is just a re-hash of a recent, but interesting, press release.

Samsung Electronics’ new GPS sports band, the Gear Fit2, is small but full of cutting-edge technologies. Six of the engineers who were deeply involved in the Gear Fit2 discussed how they worked together to set a new standard in fitness wearables, from choosing and assembling the preferred components to optimizing the functionality of the device. 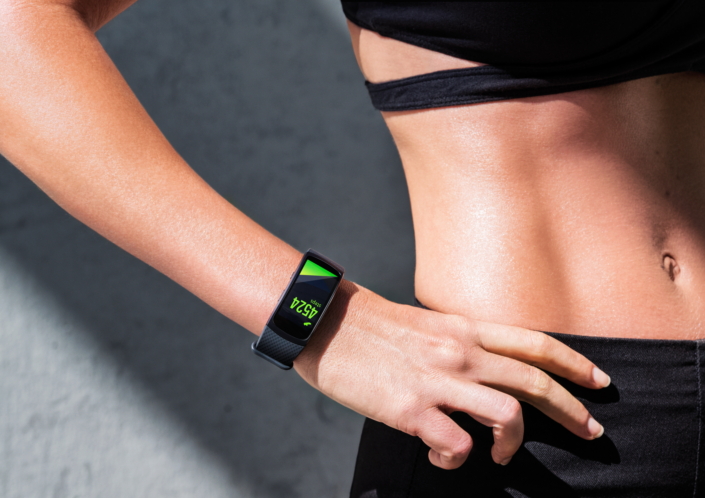 Q. When it comes to hardware, what is most notable about the Gear Fit2?

Chaekyu Choe: To improve performance as a sports band, we added a GPS, an application processor (AP) on the level of a smart watch and improved sensors.

With an embedded GPS, the Gear Fit2 allows users can go out and more accurately track their activities, like walking or running, without bringing along their smartphones.

By separating the LED and photodiode, both of which are needed to measure heart rate, we were able to use a bigger photodiode and enhance heart rate accuracy. Generally, many wearable devices have a combined module for the LED and the photodiode due to their small size. Also, the Gear Fit2’s barometer sensor, which is now about 10 times more precise, made it possible to measure elevation accurately enough to know how many stairs people climbed.

Putting all of the functions into such a slim design was difficult because the space was so limited, especially with the curved design. There are two buttons on the side of Gear Fit2, which restricts the space even more. In order to overcome these limitations, we considered how best to arrange components, how to minimize the space between chips, et cetera. We also had to reduce the number of components.

Q. How were you able to embed full GPS capabilities?

John Kim: The antenna has to receive the satellite signals, but getting it to perform well was a challenge. Antennas work better when they are further from the human body. However, as the Gear Fit2 is slim and has a detachable band, it was challenging to find an optimal spot.

So, a new method was devised: a hybrid antenna. In order to place the antenna as far as possible from the wrist, the antenna was embedded inside the display, and an assistant antenna was installed in another area, thus forming a dual antenna that enhanced performance. 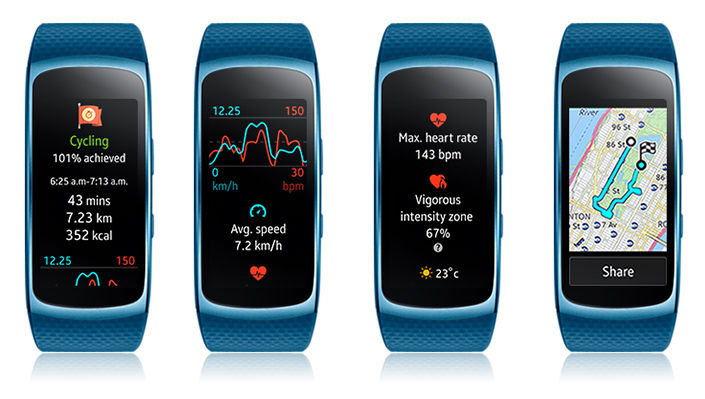 Q. How did you improve battery efficiency?

Hyukbeom Kwon: During the development, we found that power consumption can be reduced by controlling how often the GPS is accessed according to signal intensity. In general, exercise that requires GPS data is normally done outdoors where GPS signals are usually strong. So, we decided to make it turn on and off the radio frequency blocking function.

Through this low-power GPS technology, we were able to reduce power consumption significantly, so it uses about one-fourth the power of a regular GPS device.

Q. How does the automatic workout recognition work? And were there any challenges in developing this feature?

Wonhee Lee: The accelerometer sensor is used to identify the user’s motion first, and then the gyroscope sensor detects the direction and type of movement. Based on the sensor data, the Gear Fit2 can detect five types of workout – walking, running, cycling, elliptical trainers and rowing machine – and automatically recognize when those activities have been done for at least 10 minutes.

As there wasn’t any systematized database telling us “this workout is such-and-such,” we had to understand the data and figure out how to use it to identify each type of activity ourselves. To identify the exact type of workout, we had to get data from as many people as possible – because even for the same workout, the speed and intensity differ greatly depending on one’s age, height, gender, and so on.

Even after we found patterns for each activity, it was difficult to set a standard. For instance, when cycling, the Gear Fit2 detected not only changes in speed and direction, but also minute vibrations similar to what’s experienced when riding a small automobile. So we needed to find out how to distinguish between a car and a bicycle. Regarding workout equipment, there are so many types on the market depending on the manufacturer. Whenever we found an elliptical machine in a park or fitness center, we tried to use it. 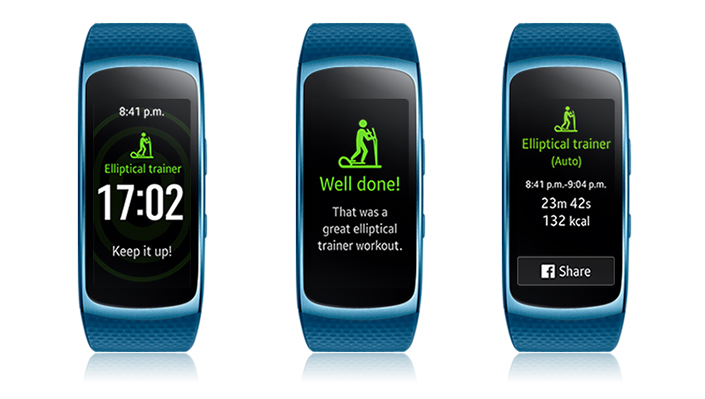 Q. What are some of the benefits of using the Tizen OS for developers and consumers?

Keunsang Han: Based on our experience developing the Gear S2, we learned a lot, such as data processing methods, communication technology between a wearble and a smartphone, and the sensor API.

From the user’s perspective, now anyone can develop applications or watchfaces for the Gear Fit2, and users can download and use it – that’s because Tizen OS-related SDKs are provided and there is an app store. You can find various fitness-related apps and watchfaces on Galaxy Apps.

Q. Was there anything unusual or different about the product development process?

Hyukbeom Kwon: Since the Gear Fit2 is a sports band, we had to test the performance firsthand, combining continuous field data with results from the lab. Even a minor modification to the hardware or software required more live testing. We would go outside, regardless of the weather, to conduct those tests. We walked and walked in the park, and exercised a lot.

Yonghak Lee: We had to consider how to customize the daily activity record for each region. For instance, we developed the screen in consideration of how Arabic script reads from right to left, and the 24-hour activity tracker needed to be modified according to time differences when going overseas.

2 thoughts on “Samsung Gear Fit2: Interview With the Engineers”