It took me a while to realise that 2XU was ‘two times you’ but I got there in the end. The XERT, as in ‘exert’, was more self-evident. XERT is part of BARON Biosystems who also make BIOSHIFT.

Before we get cracking, you need a CIQ enabled Garmin cycling computer and a couple of months’ history of your power meter data on STRAVA. I’ll be using a Garmin Edge 820 and a ROTOR INPOWER 3D+ (single side) PM. An Edge 520 or 920XT would be fine.

These are super-cool, power-based cycling metrics for ‘proper’ cyclists and also for improper cyclists..ie triathletes. I use the phrase ‘super cool’ advisedly; I could have used ‘awesome’ but apparently I’m too old to use that word now.

They are new IN-RIDE metrics that you won’t and probably can’t easily get anywhere else. Because they work based on power and a CIQ app you can use them as you cycle ie you are not tied to your turbo or some laptop in the ‘pain shed’ on a cold wintry night. They offer potential for improving your racing and training.

I’ve already covered a CIQ optimal cadence app which is a little more straightforward to understand.

To understand what this is, I think about points on the CP curve and how much anaerobic work I have left in me at any given instant, but you might find <this article> to be the best explanation by XERT.

If you have been working above FTP for 10 minutes you know that you can’t then do a maximal 60 minute effort at FTP you WILL have spent some of your anaerobic work capacity. MPA quantifies how much power you have right now.

MPA is a more useful tool than it, at first, appears. MPA is your point of failure. So as you progress through your session it will most likely keep going lower, with a few rises as you recover.

But let’s consider how you might be undertaking >Z5/VO2 intervals. You might be trying to hit 10x 100secs @ FTP+30% with a minute recovery. But why the specific wattage? You could argue that you want the same stimulus.

But is it really the same stimulus each time? Because on the 10th time it’s certainly harder than on the first time. So, although the physical work would be the same each time the strain to produce that workrate would not be the same.

The chart below is quite interesting, especially over  the 30 or so second sprint at the end. During that sprint the cyclist was working closer to his/her maximum than when churning out over 1000w a few minutes earlier.

So you could see that during your ride MPA might be telling you how hard you are REALLY trying by how close you get to MPA. Also, after the ride, you can see this with a little more perspective and if, for example, you produced MORE than MPA then you could consider your session to be a breakthrough session. 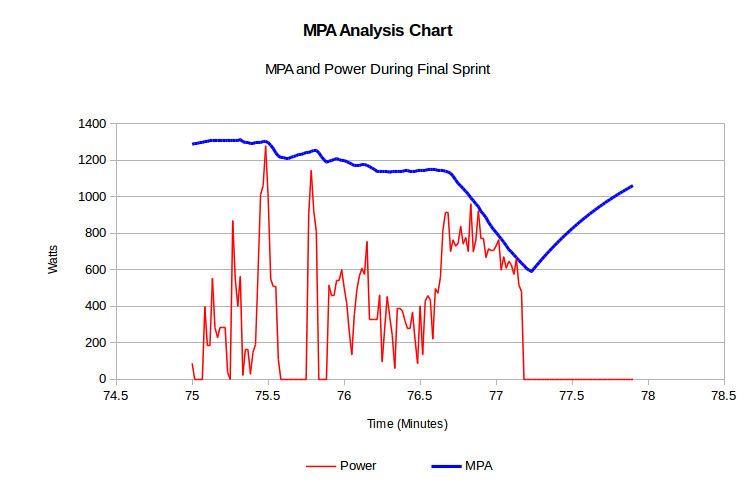 An interesting pacing tool is TTE.

At the current moment in your ride you have a certain capacity to work at a certain level for a certain period of time. You don’t know what it is.

With the TTE tool you can input a target wattage before your ride and then at all points during your ride the TTE tool will tell you how long you can sustain your target watts for. In the image below it is pre-set for 420w.

So, in your dreams, you could be cruising along at 390w or 470w and in either case the Time-to-Exhaustion @420w would be updated differently. Clearly if you are riding at 470w then the amount of time you could sustain 420w for would fall more quickly than if you were riding at 390w.

In the example below, the athlete is working at 103w but if s/he upped it to 500w then they could hold 500w for 47 seconds. The time to RECOVERY is also part of the CIQ field and if the athlete stopped pedalling NOW and produced 0w then after 94 secs they would have mostly recovered and the 500w TTE would be much higher than 47secs..

You could maybe use it as a pacing tool for an hour effort where you input a target FTP to try to PB/PR. Or you might know on a certain ride that you have a tricky hill to deal with that you have blown out on before. Using TTE you could cap your effort at a pre-determined wattage and gauage if the time remaining is sufficient for the remainder of the hill.

Issues: This is not turning you into a robot. You still, however, have to take a view on what TTE is telling you and adjust your efforts accordingly. It’s another tool. A downside I found is that you have to pre-input the target wattage before your ride. Perhaps in some circumstances a more useful figure might be the TTE at your current wattage +/- 10w ie “how long can you keep going at this pace for”.

I also found on one particularly hard hill day that my TTE went negative. I would imagine this might count as a breakthrough day or my fitness signature/CP curve on XERTs platform needed recalculating.

My opinion is that this is one of those things that you need to ‘have a go’ at. It can’t hurt and it may, or may not, help you in some way after you’ve played with it. You can get a 1 month free trial from XERT and all you have to do is set up a new screen on your Garmin like the one above. If you don’t like the screen you just flick it away and revert to your normal one.