Polar have just announced a new HRM. The H10.

This is probably a renamed H7i ie the late-2016 model we were expecting. Indeed this may well dash hopes of what the H7i might have been. however it does have an inbuilt but currently inactive accelerometer (Source: FCC) and maybe it could have a bridging function (unknown). The implications of the H10 are that really it will only suggest a V800 replacement if there is BRIDGING functionality – we do not know if that is the case (probably not).

The H10 is all about multi-channel Bluetooth , initially, supporting Polar’s links to GoPro (also announced today, below) as well as caching and supporting a T-shirt/wearable (below)

It looks to be a thinner profile (possibly handy for lane swimming) and the 5KHz band is the one that will transmit underwater I seem to remember. From the image at the top it looks like a better adhering strap as well, apparently ‘silicon rubber dots’

The device is stated to reduce interference. Perhaps this is where sometimes static is thought to cause spikes and dropouts in HR readings? Although I’ve never had that problem with Polar HRMs myself.

Slowtwitch and others show that, like the later Garmin HRM straps there are 4x sensor pads. Also this is a caching HRM that can form two Bluetooth connections (provided one is GoPro). Caching is not especially useful for swimming IN THIS CASE as Polar already handle that with the 5KHz signal – it’s more likely aimed at team sports, hence the sensing shirt will likely use this device/pod too in some modified form. Having said that, caching could be useful for Polar users who use an app (Polar Beat, maybe) rather than a watch, although you would have thought Polar would be more keen to encourage watch purchases.

Have a read of the GoPro info, below, if that’s your thing.

Announced a few days ago, the Polar Shirt also seems like a red herring for endurance athletes (that’s why I hadn’t mentioned it). A good idea. But only available as part of Polar’s offering for the rough and tumble of team sports.

This year’s CES, the global consumer electronics and consumer technology tradeshow in Las Vegas, is in full swing. As always, it’s full of exciting launches and product news. We are proud to announce the new Polar H10 heart rate sensor and more details about our GoPro connectivity.

What’s new in a nutshell 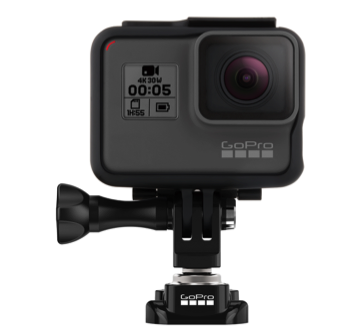 Athletes can also use the Polar V800 and Polar M600 to operate basic commands on their GoPro, such as

Optimized for professional athletes, Polar Team Pro Shirt is a sleeveless, base-layer shirt that replaces the need for a chest strap monitor. Polar Team Pro Shirt men’s base layer comes with seamlessly integrated sensors to monitor heart rate and sensor pocket located on the upper back for optimal GPS reception.

GOPRO® and HERO® are trademarks or registered trademarks of GoPro, Inc. in the United States and other countries.

3 thoughts on “Polar announce H10 HRM and a Shirt”