Lezyne are steadily improving their market position for MTB cycling head units and, to a lesser extent, wristwatches.

Why you Would Buy Lezyne

They tend to be fully featured devices at a great price. Historically you could get a Lezyne with BLE and ANT+ power meter support for under $150.

Lezyne make claims about the durability of their devices and hence their suitability for MTB use.

Historically I used some Lezyne devices as they worked RELIABLY and they worked RELIABLY OVER LONG RIDES. They had great battery life as they didn’t try to WOW the owner with a fancy, battery-eating screen. On several long bike rides, the Lezyne was the only one that was still running at the end of the ride without recharging.

Why You Would NOT Buy Lezyne

Some of the devices have a quirky aesthetic and some of the more recent devices were a little flaky when first released. Of course, the main reason YOU would not buy it is that it hasn’t got either the word WAHOO or GARMIN written on it. As mostly a road cyclist I’d probably side with you. Maybe there is a perceived risk factor? Strange when you think that Garmins tend to be quite buggy when first released.

But I suspect that the definitions of ‘cool’, when it comes to ROAD cycling and MTB cycling, are quite different. I’m not sure if using the word gnarly puts me into a certain age bracket but a gnarly MTBer would probably not use the words COOL and GARMIN in the same sentence.

Certainly, Lezyne’s marketing very much features tattooed and rugged MTBers rather than lycra-clad roadies. Danny MACASKILL…heard of him?

Lezyne have a range of watches. They are all broadly similar. Before today’s announcement here is what the range looked like

Clearly a new model was, for sure, going to build on the MICRO/MACRO/MACRO/SUPER theme. With their work over the last year on building up the navigation/route capabilities of the ALLY app it comes as no surprise that the new devices are the MEGA XL and MEGA C, both with a penchant for navigation.

Both are clearly MEGA in size with the XL one being slightly MORE mega than the ‘C’, or colour model.

Dimensions are almost 50% larger than the MACRO model:

Obviously this new move from Lezyne is going to see them exploit their position as a growing force in cycling head unit by enabling them to justify a higher price for a rugged and competent MTB navigational device that’s notably larger than their previous models.

For those of you wanting further bargains some of the other Lezyne devices are priced between $99 and £149.

This is not a review so, for now, I will just titillate you with some of the features

First up, much of the setup (like WAHOO) is undertaken from the app (Lezyne ALLY). As you can see in the image below, there is also a sneaky little screen rotate feature. #Nice (again that was for my Twitter and Instagram readers). On-device configuration is possible too but from my previous experience, I found the ‘admin’ side of Lezyne devices a little time-consuming. 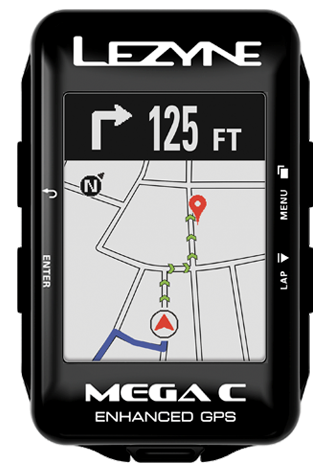 You can see some of the screen layouts on the official video, below. Here are some more of the features:

Would I buy One?

One of the must-have features for me is for a device to attach to a Windows PC as a drive letter – Lezyne does that. It just makes my multi-device life SO much easier as I can control where data is uploaded to. I still use the WAHOOs (that can’t attach in that way) but that’s because they are otherwise awesome.

Another must-have is battery life and the MEGA has, errr,MEGA battery life 😉 I’d probably use it as my trail/MTB unit and as a backup unit.