I’d missed this article from Garmin last week where one of their engineers talks about GPS accuracy improvements. Whether or not this post from Garmin is simply an explainer for the introduction of GPS-L5 in a handset model in Q4.2020 or whether it also foreshadows more exciting improvements like intelligent GNSS accuracy settings remains to be seen.

Followers of the GNSS/GPS accuracy threads on this site will find little new at that first link but the fact that Garmin is now talking publicly about the L5 frequency is great. Surely if a ‘new’ GPS frequency warrants a monthly Garmin blog post then it’s important, right?

It is highly likely that the new generation of chips will be found on the Fenix 7 release over the summer/Q3.2021 and it’s also likely that they will be tested out first on a running device before being trusted in Garmin’s most important product range. The new chips were not in the Garmin Enduro, so we can expect them SOON in a Forerunner or Edge ie very soon 😉 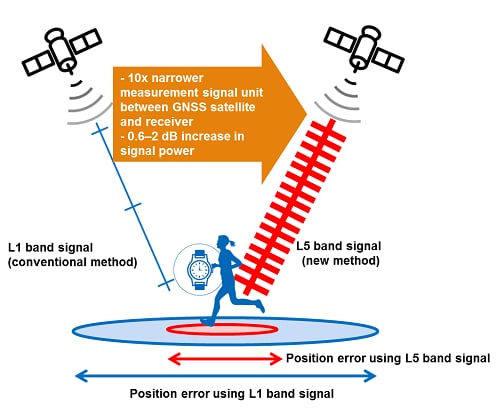 Shall We Get Excited

Well, there’s going to be a hit on battery life and a new chip may well bring new teething problems and new quirks for Garmin & Sony to sort out.

Possibly, the new chips may deliver improvements only at slower speeds like with hiking and not for higher speed sports like running/cycling, hopefully not.

That said, I think we should get a little bit excited and that we can hope for some modest and occasional improvements in the GPS tracks we love and the instant pace displayed to runners.