The Garmin Fēnix 7 is King of the Outdoors and the Garmin Instinct 2 continues in that Royal tradition, perhaps best described as the Prince of the Outdoors, or even now as the newly elected Mayor of Multisport due to a boost in its sporty features.


The first Garmin Instinct was an unexpected, runaway success in 2018 and that success continued in 2020 with the introduction of Solar charging and some other unusual outdoor versions such as the Surf, eSports & Camo Editions.

Garmin Instinct succeeded because, in one fell swoop, it attracted a huge number of outdoor adventurers who had previously preferred the Casio Look. Garmin then added more outdoors features than any Casio ever will have and set the price below the Fenix Series; suddenly Garmin had created an unlikely winner.

The latest Garmin Instinct 2 sees a slight price rise, starting at $/Eu350/£300 but it will certainly sell as well as its predecessor because many updates are added to bring; better battery and solar performance, a higher resolution screen, access to Garmin apps for the first time with Connect IQ, and serious multi-sport capabilities.

Despite looking very similar to the 2018 model, it’s the hardware innards that make up most of the more radical changes and these changes enable superior levels of performance ranging from a longer-lasting battery to a better heart rate monitor and screen. The meaningful sports software features are broadly similar to Instinct 1 but with lots of extra little goodies that will make the upgrade worth it for many of you.

Let’s crack on with the new highlights. The Garmin Instinct 2 review will come later and cover in more detail what new Instinct owners need to consider.

Here are all the tech details for those who need them 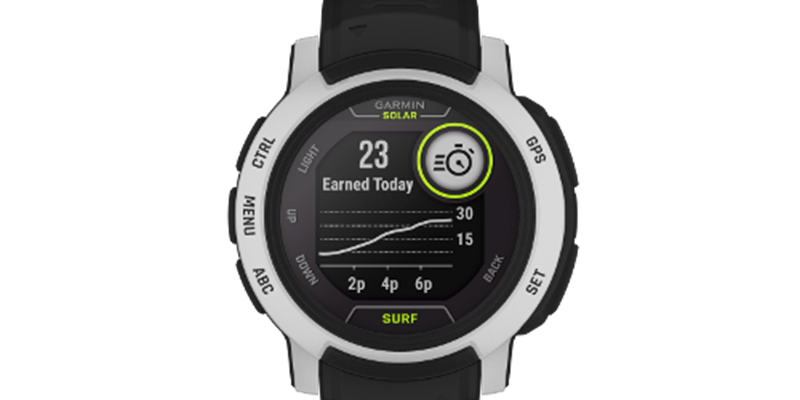 Battery lives are impressive and, with caveats, can be extended ‘forever’ with Solar+Expedition mode. Even as the battery degrades over time or if you are unable to find the time for a full charge, these battery lives will be enough for 99% of us. The smaller ‘S’ models broadly have 25% less battery life.

The Garmin Instinct 2 is certainly worthy of serious consideration for outdoors and multisport usage, especially if you can’t quite financially stretch to a Garmin Fēnix 7.

It’s packed full, but not totally full, of goodies from Garmin’s existing range of outdoors features and sports features.

However, its glaring omission is maps which, even if it had them, would look awful on the improved but small, low res screen. The lack of maps makes Instinct 2’s features comparable to the outdoor adventure watches from Polar, Suunto and Coros; and, to a lesser extent, smartwatches like the Apple Watch 7. Without maps, the only clear differentiators to Suunto & Polar are Garmin PAY and the Casio-like looks. Fine, if you like that sort of thing.

Q: What about the awesome battery life? It’s even ‘infinite’ in some scenarios, right?

A: Sure, Solar is great for boosting the battery life but how many of us could instead just charge the watch up before the weekend away or bring a battery pack. The point is: few people will really need solar charging. Some will. Competitor brands don’t offer Solar charging but they do all now offer impressively high battery lives which do the job.

Q: Should I upgrade from Instinct 1 to Garmin Instinct 2?

A: Instinct 1 is perfectly fine for its intended purpose. Clearly, you get a lot more features with Instinct 2 but there’s no specific need to upgrade unless you are unhappy right now or just fancy a change.

If you are looking for a mini-adventure or multisport watch then I can recommend Instinct 2. However, I can also suggest you look at Polar Grit X models, Suunto 9 Peak, Suunto 5 Peak and Coros Vertix 2 / Vertix 1.

Stock is limited until March 2022 and smaller retailers will only have a few SKUs and limited numbers. You will get the model you want at the larger launch partners like REI (USA) and Amazon/Wiggle in the UK/EU.

The models from before are updated and ‘S’ (small) versions are also available at the same price as every equivalent regular-sized Instinct 2 model.

Verdict: A Sweet upgrade from your current Instinct