I’ve based this article on my upgrade last year from a legacy Shimano 105 setup on a road bike to somewhat of a mish-mash of higher spec Shimano ULTEGRA and Shimano DURA-ACE components. This quickly morphed into a new frame and effectively a new bike build. Whilst I was at it I decided to enter into the 21st Century and introduce Shimano Di2 into the mix.

Only so much can be said about lighter and sleeker ULTEGRA/DURA ACE components BUT Di2 tickled my fancy and I found Shimano’s Di2 to be MUCH more of a useful addition to my cycling than I had expected.

98% of you will probably only encounter Di2 when you buy a new bike. It’s an expensive upgrade.

So this article might be very useful for you to convince yourself to buy a new bike in order to enjoy the delights of Di2 😉 For those of you planning an upgrade then you should do your sums carefully as you may well get a much better deal on Di2 components built into the price of a new bike than you would from buying them separately.

Di2 turned out to be much more useful and capable than I thought it would ever be. Even the integration with head units and shifters was more extensive than I’d imagined.

There are a few negatives, but not many, for the sake of balance I’ll cover those as well. Di2+Ultegra/DuraAce components are not cheap but the benefits are many and varied. Some benefits might be less obvious such as ‘automatic trimming’ aka Di2 automatically makes tiny adjustments to derailleur positions to stop annoying noise from the chain catching the derailleurs. More obvious benefits would include NEVER AGAIN having the need to run near gear cables through your frame at every bike service.

I’ll cover the benefits and my experiences in more detail. So this post is fairly long. Here is a jump-list if you have come here for a specific Di2-related reason. If not then ‘Welcome!’ and read on…

Shimano Di2 is electronic gear shifting. It works on Ultegra components and also the highest spec DuraAce components but not the entry-level Shimano 105 components.

You remove the need for shifting cables but instead introduce the need for power cables and a battery. Every component needs to be linked to one, single battery for power. There are many configurations and nuances for different frames and components, thus installation is NOT trivial. Other manufacturer systems have wireless connections, which I guess would probably be easier to install.

There are a variety of modes of operation including the ability to auto-shift across both front and rear derailleurs by using just one controller as well as to control your Wahoo/Garmin display from buttons on top of your hoods.

‘Di2 battery status’ and ‘current gear’ are metrics that will be supported by many cycling head units and cycling watches via Bluetooth and ANT+ in Di2. The Bluetooth support further enables configuration and digital maintenance from your smartphone.

There are ‘go slightly faster‘ performance benefits as well as ease-of-use benefits.

In no particular order here are some of the benefits

The main drawbacks would be: the cost; the complexity of installation; reliance on a charged battery; and sometimes a seemingly longer shift-time between gears. Some people also argue that the shifting ‘feel’ is not so good when the rider is wearing gloves

Initially, shifting was absolutely perfect on my shiny bike.

I’m not the best person in the world at keeping my bike looking shiny-new although I am careful enough to not throw it into things or crash. Nevertheless, after a few months, I had to re-index the rear gears via the app. The app does work and it does do the required job. But the interface and feedback it gives could be improved.

Ever since that re-indexing, there is one specific downshift that just won’t work properly. It just doesn’t quite go in all the time. If I adjust to either of the next settings on the app then several other gears don’t work. I’ve not got a bent hanger, so who knows the problem? Actually, I do. On the rare occasion that I give my chain a good clean and lube and the clean everything else in the vicinity, then shifting in that one pesky gear is almost good – the rest being perfect.

In my naivity, I assumed that the Di2 unit sent ‘current gear’ info back to the head unit. It, sort of, does that. For an 11-speed cassette it would send back which cog you are in ie 1 through 11. But it does NOT seem to know how many teeth are on each cog (although it should pick that up if the info in the E-Tube app is set properly?).

“How could it?” I hear you cry. Well, you can program the gears info into the Di2 unit via the Shimano app. So your setup should know. Thus, I seemed to have to make the same changes to on my head unit eg directly onto an Edge or via Wahoo’s app. You don’t HAVE to do that, the shifting will still work, it’s just that your post-ride analysis of gearing will be wrong if you don’t. If you are changing rings/cassettes on a regular basis then this would be a real PITA. I’ve not changed mine for over 6 months, so I can’t really complain.

Another thing to be wary of is the battery location. Mine is hidden away in the seat post. When a long-legged friend of mine borrowed my bike there was much seat post adjusting going on. After whacking it up and down a few times I remembered there was a battery in there. All was fine but..you just need to be mindful of that rather expensive piece of Shimano componentry.

My original plan was to put Di2 onto my climbing bike but it turned out that the frame was from the year before Specialized supplied them with the holes pre-drilled. I could have drilled some holes in my lovely frame but that just didn’t seem right. Plus, I suspect, the person who was doing it for more me couldn’t be bothered.

Some of the visible electronic components are exensive. I am surpried that more are not stolen and re-sold. (I’ve never heard of it happening)

The final and most obvious drawback is running out of juice. It seems like I am one of those people that frequently change gear and hence rapidly depreciate my juice reserves in the Di2. If you only ever do 1 or 2-hour rides then all will be fine as my commonly used head units (Wahoo/Edge) give a battery warning sufficient to get you to the end of those 2 hours (probably). However, on one long (5 hours?) ride with an already and unknowingly depleted battery I got to the point with just under an hour to go where the battery got critical. IIRC what happens then is that the smallest front ring is shifted to and you are not allowed to move from that. IE you have a final grace period of just over half an hour (maybe longer) with rear gears only –  a similar end-game is arrived at with wireless shifting, you end up switching the lesser used front battery to the rear. Another near disaster was at the start of an 8 hour day when I discovered I hadn’t charged my Di2 at all, luckily I had the charging cable and some insulating tape and someone else had a USB battery pack to charge the Di2 on the fly – all was good.

There are Shimano component options that cover

There are a lot of combinations there which I’m not even going to try to cover.

I planned to write a post on “The Shimano Di2 Bible”, however, that is a massive and complex undertaking. Plus I already realised someone else had already done it! So here is a link to Carlton Bale’s rather great post on this subject – great for you wannabe Di2 DIYers.

Once you understand the broad principle of what connects to what, then you can probably extrapolate how you might add that ‘special’ bit into the system in the future.

If a diagram is your thing…this is a good overview

Some things to bear in mind 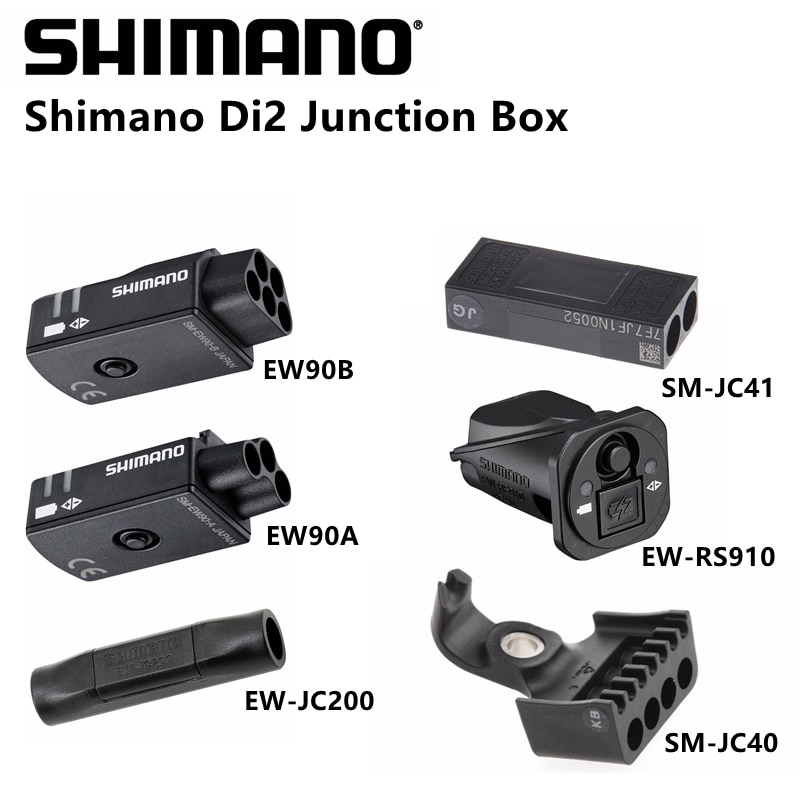 The beauty of all of this is that much of it is hidden away. Even the port on my handlebar stem could be replaced with a similarly functioning port which goes at the end of your handlebar drops…cool! Clever. (EW-RS910 above)

You NEVER need access to the battery in your seat post as it can be charged via the port under the handlebar stem. Or, as in the case of the EW-RS910, you can see the charging port underneath the button in the diagram further above.

That all sounds great.

Newer frames may be specifically designed to accommodate the junctions and wiring routes. Older frames and handlebars may present you with a few challenges, only solvable only with a drill and patience.

It is possible to upgrade from an older Shimano Di2 system to one that connects shifters and info to your Wahoo/Garmin units. You will need the EWWU11, as well as a newer type of battery BTDN1100/01 to power it and the rest of your existing Di2 system. Those two components will together set you back over $/£/Eu100.

Sigma Sport had recently sold out of those specific parts, so you might have to shop around.

These are covered in a bit more detail in this post.

What would I have done differently?

I have few regrets with this upgrade.

Would I miss Di2?

I suppose I would miss the ease, consistency and smoothness of electronic shifting. But I would also miss the coolness of the tech too. But more importantly, I just wouldn’t be able to cut it with several of my cycling buddies who have top-end bikes which naturally all have Di2.

If you’re buying a half-decent bike then you should consider Di2.

Personally, if I was to buy a new bike, I would almost certainly have Di2 on it. But I don’t think I will perform an upgrade on one of my other bikes, even though it is tempting on the TT bike.

I would find it hard to recommend anyone to perform an upgrade unless they REALLY loved bike DIY and didn’t mind the cost.

There’s also reassuringly expensive noise of changing gear which broadcasts to all around you that you can afford Di2 😉 [C’mon, that’s the main reason you’re going to buy it, right?!]

For most people, if you are trying to justify Di2 on the post-ride data insights that you might get for optimal gearing then I reckon those benefits are quite thin on the ground. Similarly, a few new data fields on your Wahoo or Garmin aren’t worth several hundred bucks. At least they are not worth it for me.

However, I like the ability to use the buttons on the tops of the shifters to trigger Di2 events like changing data screens on the Wahoo but more usefully to add a lap without having to reach for the head unit – although if either Garmin or Wahoo had ‘lap by position’ I would use that even less on my laps of the local park.

I didn’t like the (Semi-) Synchro Shifting modes but thought, initially, that I would. Some of you will love them, probably one in 4 of my Di2-enabled buddies use this mode.