Apple has just announced watchOS 8, which is the latest version of the company’s smartwatch platform designed for the Apple Watch.

The software is typically iterated annually and is available now for developers with the first released version almost certainly coinciding with a new Apple Watch 7 (AW7) in September 2021. Additional software features may also be discovered soon or released in the lead up to September, especially if there are new hardware capabilities on the AW7 – although I’m not too sure if we’ll see much change to the hardware sensor capabilities in September.

Impressively, this new software version will work on previous AW versions back to AW3 but there will probably be a lack of space on the very early models for a clean and simple upgrade.

There are quite a few new goodies to play with and I’ll just focus on those with fitness & health implications.

As expected the Fitness app gets a few new sports profiles, this time around it’s the turn of Tai Chi and Pilates. Yay!

Also added is a new Mindfulness app that is linked to the Breathe app which itself also gains a new, cool-looking animation. The Breathe app is a little-known way of manually recording HRV readings. It remains to be seen if there are any new nuances to how Breathe works as it needs a few tweaks.

Another expected addition only on the Apple Watch 6 (not AW5, not AWSE) is the enablement of UWB to find Items like AirTags and expensive sets of car keys that also support UWB. I don’t have a Tesla but I do have some AirTags, so I’m looking forward to seeing how the visual interface to Item finding works on the small watch face, if it’s anything like on the iPhone it should be good.

Garmin and many others have already introduced breath rate/respiration recording. This can be used in some recovery metrics but has more uses in sleep analyses and in spotting relatively acute health changes. I highly doubt we will see it being able to support detection of VT during higher intensity efforts as it usually relies on subtle interpretations of relatively stable heart rate beat detection, however, Apple is doing this differently and is using a 50Hz accelerometer which should give accurate data over longer (sleep) periods. Respiratory rate data can then be fused with other Health metric changes to give more insights into upcoming illness (eg Covid!) and sleep apnea. 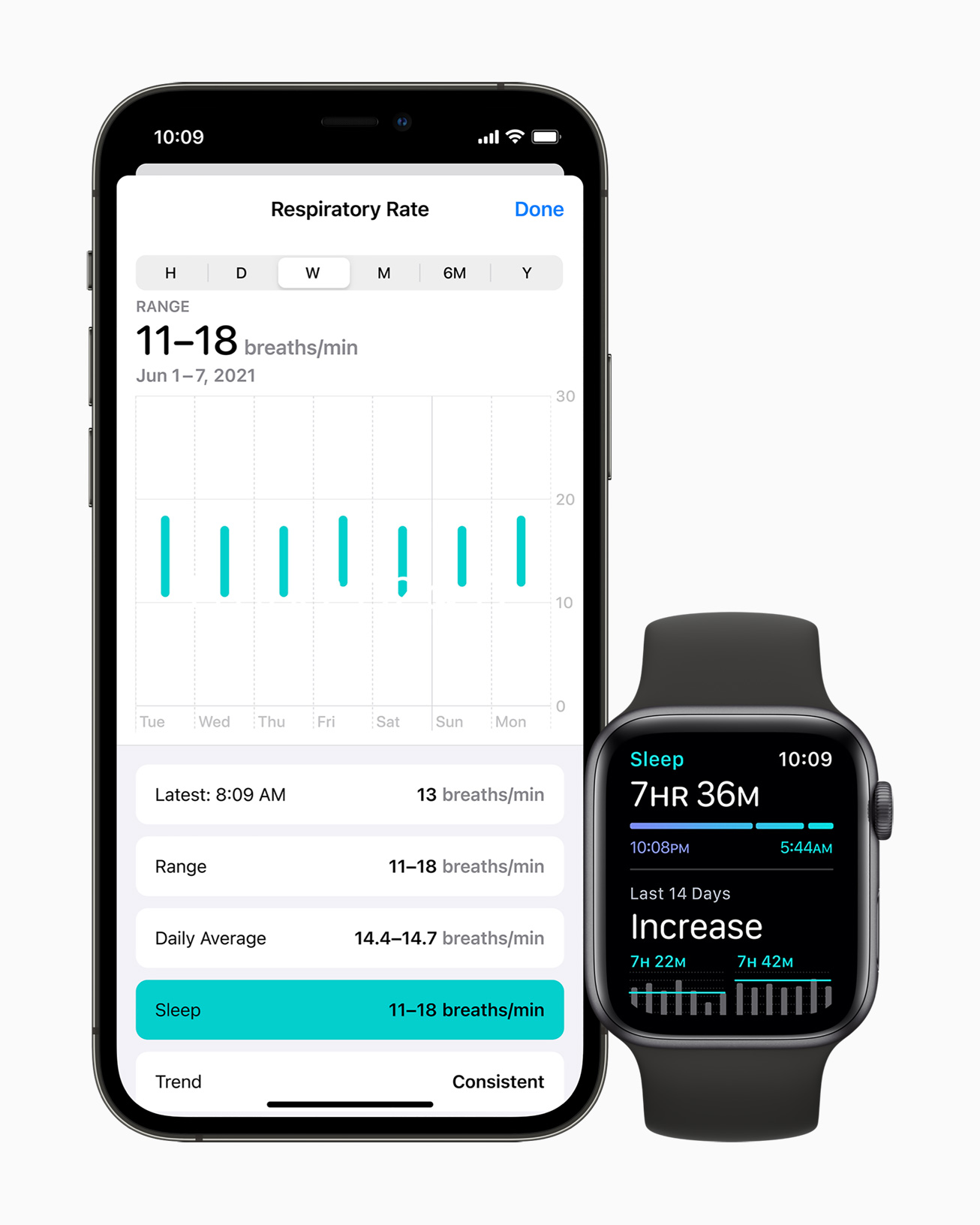 It looks like it might also be possible to tweak some of the sports modes to have a different focus for showing you push notifications whilst exercising…I’ll have to clarify that one but the general possibility is there with new FOCUS modes which are variations on the existing Do Not Disturb mode.

Fitness+ has also been extended to cover a new instructor, new workouts, new music artists and picture-in-picture display. I was not expecting Fitness+ changes to be announced today so I hope today’s changes foretell some more major announcements over the coming months linking Fitness+ and GymKit.

Changes are also made to Health and you can now securely share Health information with others like your doctor. But this has also been extended so that you can share key health data and alerts from your kids or, perhaps from your elderly parents too.

Cyclists may also be happy with ‘Next Hour Precipitation’ alerts…I will be.

Sports App developers might like the possibility of always-on screens, and this release seems to be giving it